Lead Us Not Into Temptation

Lead us not into temptation… 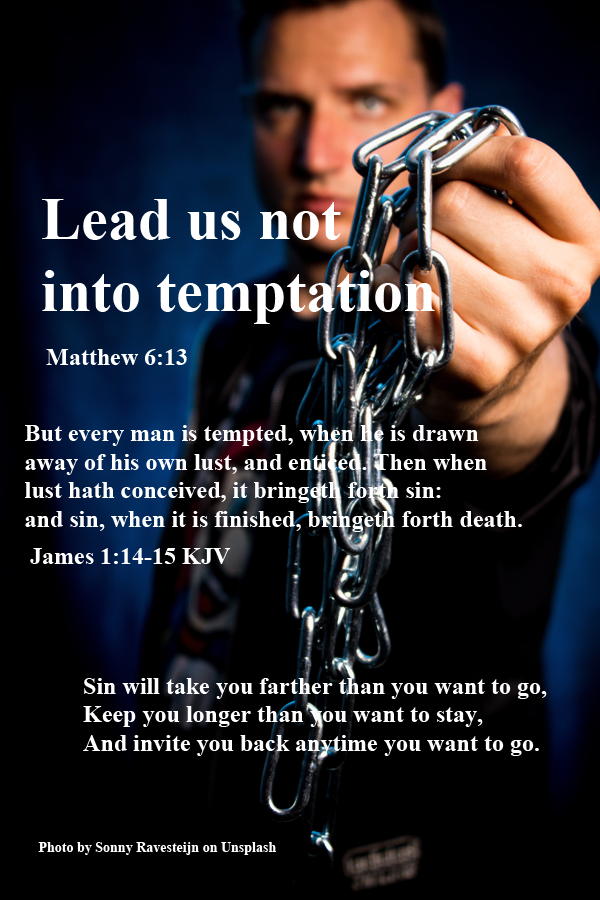 Being tempted is not sin, Jesus was tempted by Satan at the start of His ministry, after fasting 40 days in the wilderness. It is no different for us today. Being tempted is not sin. Giving in to the temptation, dwelling on the temptation produces sin on our lives.
We are in a spiritual war and the enemy wants to rob us of the blessings of God by bringing sin into our lives. Sin will always take you farther than you want to go, keep you there longer than you want to stay, and invite you back more often than you want. And, according to James 1:15, sin will produce death. It is sometimes difficult to admit that one of our biggest enemies in the spiritual war is part of our nature. It is our flesh, not our physical bodies but our "old nature." Paul said in Romans 7:18 NKJV "For I know that in me (that is, in my flesh) nothing good dwells; for to will is present with me, but how to perform what is good I do not find1."​

James 1:13-15 NKJV
Let no one say when he is tempted, "I am tempted by God"; for God cannot be tempted by evil, nor does He Himself tempt anyone. [14] But each one is tempted when he is drawn away by his own desires and enticed. [15] Then, when desire has conceived, it gives birth to sin; and sin, when it is full-grown, brings forth death.

Galatians 5:19-21 NKJV
Now the works of the flesh are evident, which are: adultery, fornication, uncleanness, lewdness, [20] idolatry, sorcery, hatred, contentions, jealousies, outbursts of wrath, selfish ambitions, dissensions, heresies, [21] envy, murders, drunkenness, revelries, and the like; of which I tell you beforehand, just as I also told you in time past, that those who practice such things will not inherit the kingdom of God.

All of the "works of the flesh" give the enemy an opportunity to tempt us to sin. You may not be tempted by everything on the list is Galatians 5 but the enemy knows you very well and knows in what ares you are most vulnerable. However, Galatians 5 also provides another list for believers.

Galatians 5:22-23 NKJV
But the fruit of the Spirit is love, joy, peace, longsuffering, kindness, goodness, faithfulness, [23] gentleness, self-control. Against such there is no law.

2 Timothy 2:22 NKJV tells us to "flee also youthful lusts; but pursue righteousness, faith, love, peace with those who call on the Lord out of a pure heart." The most effective technique to fight temptation is avoidance. Don't do things or go to places that are sure to tempt you. Rely on Proverbs 16:9 and listen to the Lord's leading in your life.

Proverbs 16:9 NKJV
A man's heart plans his way, But the LORD directs his steps.

But our part has to be obedience to the Lord's leading. There are three basic responses to temptation that have been provided to avoid temptation. Resist using the Word of God and the Sword of the Spirit, flee in a figurative sense as in 2 Timothy 2:22, flee in a literal sense as Joseph did in Genesis 39:11-12.

2 Timothy 2:22 NKJV
Flee also youthful lusts; but pursue righteousness, faith, love, peace with those who call on the Lord out of a pure heart.

Genesis 39:11-12 NKJV
But it happened about this time, when Joseph went into the house to do his work, and none of the men of the house was inside, [12] that she caught him by his garment, saying, "Lie with me." But he left his garment in her hand, and fled and ran outside.

Psalm 23:3 NKJV
… He leads me in the paths of righteousness For His name's sake.

God has provided us with His "full armor" for daily wear, see Ephesians 6:10-18. We need to "dress for success2" each day as we go out into the world. Then we are prepared to stand firm.

Ephesians 6:13 NKJV
Therefore take up the whole armor of God, that you may be able to withstand in the evil day, and having done all, to stand.

1 Corinthians 10:13 tells that temptation is common to everyone but that God will not allow us to be tempted beyond what we can handle and will make a way to escape from the temptation. We, for our part, need to listen to God and use the weapons He has provided.

1 Corinthians 10:13 NKJV
No temptation has overtaken you except such as is common to man; but God is faithful, who will not allow you to be tempted beyond what you are able, but with the temptation will also make the way of escape, that you may be able to bear it.

1 Peter 5:8-9 NKJV
Be sober, be vigilant; because your adversary the devil walks about like a roaring lion, seeking whom he may devour. [9] Resist him, steadfast in the faith, knowing that the same sufferings are experienced by your brotherhood in the world.

When you subscribe to the blog, we will send you an e-mail when there are new updates on the site so you wouldn't miss them.

Deliver Us
Forgive Us

For Yours is the Kingdom

Give Us This Day